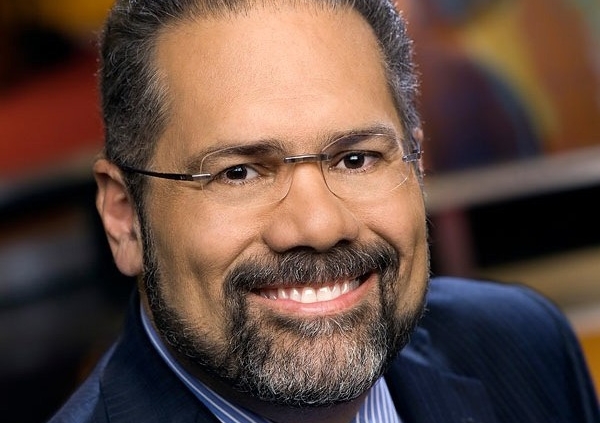 Ray Suarez was the keynote speaker at the 2019 Interfaith Action Annual Assembly. He is one of the country’s most respected news reporters, with four decades of experience covering stories for NPR, PBS NewsHour and Al Jazeera. He also is a member of the Washington National Cathedral (Episcopal) leadership team.

Notably, Suarez reports on a range of issues driving change in American life, including race, immigration, demographic shifts, and the role of religion in public life. With a front row seat to the rapid evolution of the country’s changing landscape, Suarez offers a fascinating firsthand perspective on the implications of these trends on individuals, organizations and national policy.

The veteran journalist shared some shocking information about demographic and social trends that are having a significant effect on our religious institutions. So, what does that mean now, and what does that mean 20 years from now? Read some of what Suarez shared:

“Among all American adults, a larger percentage every year have no religious affiliation, up drastically since as recently as 2000—whether raised with a religion in the family home and abandoning as adults, or in fact never professing a faith identity, as it becomes more common and more mathematically likely that both members of couples forming households were raised without a religious affiliation…A new, drastically higher percentage of people are what demographers and social scientists are increasingly calling, “Nones,” people with no religious affiliation. In just a handful of years, from 2007 to 14, according to Pew, the percentage of unaffiliated adults rose from 16 to 23 per cent.”

…”And yet, for all the discouraging news easily gleaned from data sets, here we are tonight. There’s more work, there’s always more work to be done than there is workers to do it. Need is never in short supply … People of faith matter to the quality of life in America. And the motivating ethic is a far cry from the ethnically, racially and linguistically narrow target populations, now an artifact in a diversifying society. The question in 2019 is not so much ‘Who are you?’ as it is ‘What do you need?’ ‘How can I help?’ The social service organizations don’t really have as a sole or primary motivation “will doing this get me more members?” The theological underpinning across religions might be better understood as a belief that helping heal the injuries of a wounded world makes the world more whole, more coherent, more just, by definition. For all of us.

… “I head out my door into the world every day convinced that individually and collectively, the private voluntary sector does powerful, influential work, and that the work has a multiplier effect, allows their point of view about the world, about how we belong to each other, about what we owe to each other, about what it means to be a compassionate person in this world of too much suffering, to reach a much wider audience, backed by the high impact of our efforts, day after day … I can’t tell you how often people have told me with real fondness of what they learned in a church school…even in the midst of telling me they’re an atheist, or recounting a story of themselves as the kid in chapel every morning who counted the tiles in the ceiling or fell asleep in chapel…but they still find the values they were taught essential. Not people who are soft in the head. Not people who are engaged in a futile struggle against social realities that will not yield to their labor. Not people who are insincere, or motivated by guilt, but instead…people who bring love, care, and the values they carry in their heads and heart, of a lifetime of teaching and learning and prayer, to the work of being alive and being present in the complicated 21st century.

… “you, in a wider community like the Twin Cities, are helping to build a roadmap for how we are to live together going forward. You may have, in the view of scholars, different theologies. You may not agree in highly specific ways when it comes to what we say in prayer, how we say it, the nature of God, the afterlife, the nature of the soul, the meaning of life. But as coalitions, as groups of believers who go to work motivated by the knowledge that there’s so much to do—there’s so much need—it doesn’t matter that much whether the person at your shoulder believes in one God, many gods, or no God…what you share trumps what you don’t. And even in the broader community the many people who have a childhood memory of the religious people in their lives being decent people who cared for others. You grind away, trying to make steady progress in work lots of other people don’t want to do, but needs to be done. Here you are. And a sizable part of the wider community may not want to join you on Friday, Saturday, or Sunday but they’re glad you’re there all the same. You are a standard, a steeple, a well-lit place, that reminds people the values you teach, are proclaimed by the world you do.”

A Report on the 2019 Annual Assembly
Scroll to top